The only way to do it we were able to find is to create an additional alert based on Notable index for every Correlation Search, then use the TA to create a response action for this alert and to send all Notable Event data to our incident management tool.

This solution has one main issue:

I’d like to know if anyone faced the same issue before and was able to find a better solution.

did you ever find a solution to this? I'm having the same issue right now and I would highly appreciate to know how you did it in the end.

I'm also online in the Splunk user group slack space (name is Julian, avatar is a dwarf with a splunk logo on a book) if you want to chat real quick.

For now, we use a workaround solution which is another app: https://github.com/swiip81/create_thehive_alert

It doesn't solve the main issue — synchronisation with Notable Events. However, this app is much more flexible.

The main solution is to create a new app, based on index "notable". Our Tool Team is working on it. The idea is simple:

So how it will work (should work at least):

1. Our Correlation Search, lets call it "Bruteforce_detected", returns some results

2. The "Notable Event" Adaptive Response Action creates one or more events in "notable" index. The value of 'search_name' field for these events is "Bruteforce_detected".

3. Our "TheHive alert" Adaptive Response Action checks "notable" index and grabs all events where 'search_name' field is equal to "Bruteforce_detected" (the events that has been just created).

4. "Earliest TIme" and "Latest Time" are equal for both actions. In this way we could be sure to grab only the events related to current Correlation Search execution.

5. For each event it creates a corresponding alert in TheHive.

Hope it was helpful.

P.S. actually you may want to use `notable` macro instead of "notable" index. It gives you some additional  information.

Wow, I was not expecting such a nice answer. Thanks Alex, that helped a lot already!

That's a nice workaround, but I don't quite get the alphabetical order you mentioned. I created a new app with an adaptive response action called "zzz_test", which is definitely > "Notable Event" and added just this code:

Next, I edited a correlation search and added the "Notable Event" and "zzz_test" adaptive response actions. I still don't see the notable fields like the event_id in the log output. The search also does not return any results.

I'm currently thinking of a slightly different solution. I want to create a saved search, which is executed every minute (* * * * *) and triggers my alert (the real one is called "forward_notable_to_nts" instead of the example above zzz_test):

The adaptive response action is still also run from the correlation search. If the event_id is missing, it will store the SID (searchid) in a KV Store for later processing of the event once it is indexed and has the notable fields.

The adaptive response action script will also check if it was run with the parameter "notable_sync_scheduled_run". This is how I know if the script was executed by the saved search instead of the correlation search. In this case, it will check if there are entries in the KV store and make another search using the notable index like:

This time I should get the full notable event.

I would not need an additional app, but you know, it's still a workaround for a pretty weird issue, which should work out of the box in my opinion.

What do you think of this solution?

Do you know if there is a better solution?

I created a flow chart for better understanding what I just developed. It is working like a charm. 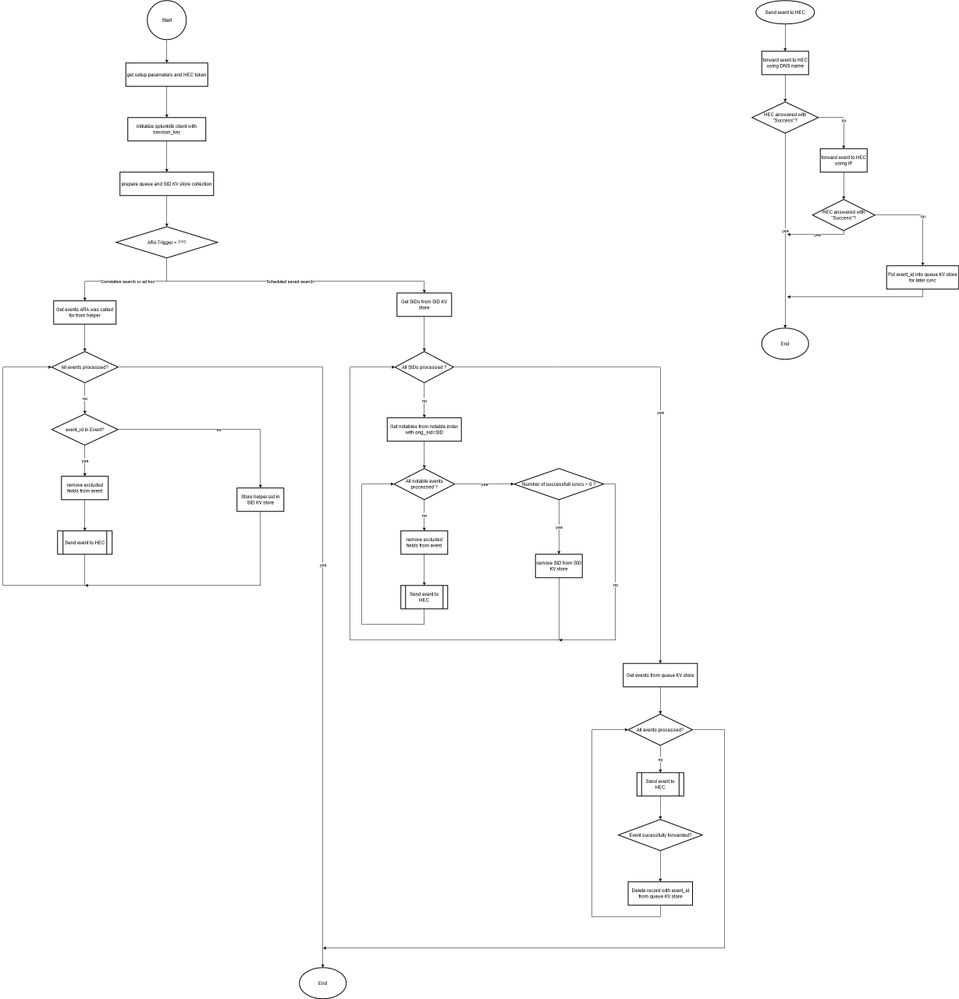