Why does my Search Head Cluster Captain start delegating scheduled jobs more to one cluster node over time, and how do I prevent this?

EDIT: This is still an issue in Splunk 6.4

I'm noticing that over time, my SHC captain starts favoring one cluster node over the others for scheduled job delegation. After a cluster restart, the scheduler returns to even balancing, but the pattern repeats. Jobs are still getting done, but it seems odd that one node will get all the jobs while the others are left relatively idle.

There appears to be a setting controlling this in server.conf:

However, I can't seem to find any documentation on how 'scheduler_load_balanced' works, and thus what might be going on in my install. Can anyone clarify and/or point me to more information?

We are seeing the same behavior in our 7 node search head cluster. All hardware is identical. Here are a few things that we've noticed. Nothing proven over time. Just observations at this point.

Very interesting question. There doesn't seem to be much information on that particular option. Is it possible that those jobs are becoming "sticky" due to other reasons?

I think its this last line that might be a clue as to what "could" happen. Upon cluster restart each member is given the opportunity to run the job. For some reason there is an issue that the captain detects. The job is reassigned to another member. Other jobs also fail on the same members so they naturally all end up on the same machine.

As this is a one time reassignment it does make sense that jobs would potentially get stuck on a particular box. It doesn't however explain why almost all jobs end up on the same box. What should actually occur is that a specific set of jobs would only run on specific members. ie. in your timechart the red member should also have jobs that were originally assigned to it reallocated to other members (unless there are never having issues on this particular machine).

So the question might be, is there any difference between that red member and the other two (ie. more cpu/memory) that might indicate why it is preferred over the other two members?

edit: I just checked on our shc and it does appear that some members have stopped running jobs at some points in time.

they're all identically provisioned servers, both in resources and configuration. I'll check for jobs erroring or being reassigned. 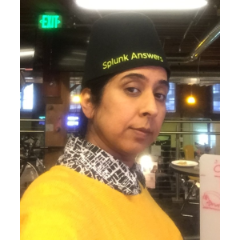 Could you please change all the SHC members to have

We have seen that using 'round_robin' load distribution is even between SHC members.

This blog post is part 3 of 4 of a series on Splunk Assist. Click the links below to see the other ...